You are here: Home / Training / A Case for Autoregulating Energy Intake During Gaining Phases

Before we dive into this topic, let me state a few key points first.

With that said, now let’s get into the meat of this article.

Like any analytical bodybuilder from the “IIFYM” era, I tracked my macros and weight as a part of my nutritional approach to my sport, ensuring I was either cutting, or bulking effectively. Like most folks, I established my maintenance energy needs, set a target rate of weight gain, and then upped the calories until the appropriate rate gain was achieved, adjusting as needed to keep the gain-train rolling down the tracks.

However, time and time again, many of us (especially us drug free folks) found that this process was short lived due to fat excess fat gain requiring repeated mini cuts. From what I know now, the main issue was we had unrealistic expectations and were trying to gain weight too quickly. Evidence suggests rather than trying to gain 0.5-1lbs per week like we did (roughly 1-2% of my bodyweight per month), I should have probably been trying to gain at roughly half that rate, putting on 0.5-1% of my bodyweight per month to avoid excess fat gain.

However, my recent experiences since the end of 2015 have helped me realize that perhaps it’s not just the rate of weight gain, and the accordant energy intake that was the culprit of my repeated excess fat gain during each gaining phase, but perhaps how I consumed this energy surplus as well.  To understand this personal anecdote, you’ll have to understand my journey since moving to New Zealand from the US.

I left the US in late August 2012 to pursue my post graduate education at Auckland University of Technology in New Zealand. Prior to this, from 2006 to mid 2012, I literally tracked my macros and calories every day, except for brief periods on vacation or post competition. Sure, I worked-in eating out and social activities, but it was all tracked. When I left the US, I knew the foods would be unfamiliar, I knew I wouldn’t be stepping on stage for at least 4 years and I saw it as a good opportunity to try autoregulating my food intake. I had been tracking so long I couldn’t help but be aware of rough macronutrient intakes, I had developed healthy eating habits, and I reasoned that if I paid attention to my hunger and fullness a bit more while periodically checking my bodyweight, I would be able to eat an appropriate number of calories.

Turns out I was right. From 2012 to the end of 2015 I maintained between 91-93kg (200-205lbs) while increasing my powerlifting total from 585kg (1290lbs) to 617.5kg (1361lbs) pretty much just eating what I wanted while making good decisions in terms of protein intake, protein spread, and eating micronutrient dense foods.

Then, when I finished the bulk of my data collection in the end of 2015, I finally had the time and energy to train with the volume and frequency I knew I would need to keep progressing. I had been “recomping”, eating at maintenance and getting stronger for 3 years, and I was starting to plateau. Now with more time and energy to put into training, I wanted to try gaining weight. This would be my first dedicated gaining phase since 2011, except this time, I didn’t setup caloric or macronutrient targets. Instead, I ate what I wanted, but I switched to more energy dense foods, I started eating out more regularly, and instead of being “satisfied” after meals, I tried to be “full”.

Now, it wasn’t completely pretty, I got FAI surgery in February, and certainly my body fat percentage got worse for the few months after while I was recovering, being relegated to machine work, and no hip extension for a while. However, as my training returned to normal, my body composition subsequently improved and I’ve been reaping the training rewards of my added muscle. While squats and deadlifts took a long hiatus due to FAI and subsequent surgery, my bench went from 150kg (~331lbs), to 165kg (~364lbs) and since rehabbing my hip, I’ve hit a high bar squat personal best of 200kg (441lbs) with some room left over (I would estimate a 205kg/452lbs max) which is pretty awesome as that’s approaching my pre-surgery low bar max of 225kg (495lbs).

Point being, it seemed that the combined factors of training more and having greater recuperative abilities due to finishing my education (which is a huge part of my success), and also autoregulating my approach to nutrition, have resulted in a leaner, more effective weight gain period than I’ve had previously, even when I was younger with less training experience. Now certainly part of this is due to just doing more in the weight room and being less stressed, but at the same time it’s not like after my contest seasons in 2007, 2009, and 2011 those same conditions didn’t occur. Therefore, it makes me think the autoregulatory approach played a role in my recent success. In further support of this, my clients who have gotten to this stage of their nutritional tracking journey have also seen good progress using this approach (and again I would caution this is something to do only once you’ve been tracking and also stopped tracking for a while).

Now why would this theoretically be a good approach compared to a static intake? To answer that, I’ll use two graphs: 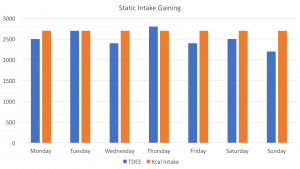 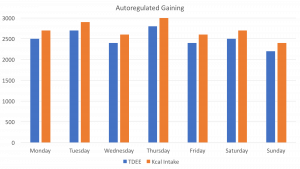 In the static gaining model, you can see the typical approach of establishing what you think your maintenance energy needs are, which are 2500 kcals on average, then going up 200kcals to 2700kcals to get an appropriate rate of weight gain. However, everyone has fluctuations day to day in TDEE (and believe it or not this has more to do with activities of daily living than lifting weights, which contributes only a small amount). Thus, in the static approach, as TDEE fluctuates, your surplus (or deficit) does as well. On Tuesday you’re actually at maintenance, Thursday you’re in a small deficit, and on Sunday you’re actually in too large of a surplus.

However, in the theoretical autoregulated model (and I emphasize theoretical since it’s not like I or my clients live in a metabolic ward when doing this), because you’re using hunger and satiety signals to regulate your intake, it adapts to your TDEE, and you maintain an appropriate surplus more of the time. In the short term, stuff like this probably makes very little difference, but over the course of years (in my example just over a year and a half) this could theoretically add up to a slightly more efficient gaining phase by keeping more fat accumulation at bay and ensuring an appropriate surplus to support muscle gain.

As a final note, this is purely theory, and a combination of personal and coaching anecdotes, and certainly some people will do better with a static model if they aren’t good at regulating their food intake based on hunger (or if they find their hunger is suppressed by hard training) but for some, like me, this might be a path to some late-stage progress you didn’t know you could make.

Life is filled with triumphs and failures. We are not defined by these events, but rather the choices we make when faced with them. Natural bodybuilding is about choice. It is not our place to judge … END_OF_DOCUMENT_TOKEN_TO_BE_REPLACED