You are here: Home / Contest Prep / My Reverse

I pride myself on being one of the more “stable” and “healthy” fitness personalities out there today. Because of this, it takes some looking away, on my part, to even share this with you guys. My primary incentive to share this is because it might help others currently dealing with a similar situation. At one point in time I was in a confused, unhealthy, and frightened place. Unfortunately, it didn’t have to be that way.

What I am referring to was a long time ago, 2008 to be exact. I was coming off my most successful season of bodybuilding across all categories. I had even regained faith in myself; the same faith that I had lost the previous season during my less than sensational rookie campaign. However, this particular year, I pushed my body to places that I didn’t know were possible and I earned pro status in every major natural federation. As the old saying goes, “like all good things”, and thus, it was bitter sweet to have my dream-season come to an end. It was a journey that started in early January at about 195lbs (like most new bodybuilders I had no idea I was “fat” relative to my eventual stage weight) and ended with me collapsing at the finish line at about 155lbs come August.

Besides starting too heavy, there were a string of mistakes I made during that dream season. First of all, I had initially underreported my calories to my coach (at the time) Layne Norton by quite a chunk. I remember getting to the point in the application that asked me about my current intake. I had never tracked a single thing that I ate, but I felt like I had to write something down order to get the pass from Macro St. Pete. So, I went with 100f 300c 200p as it seemed reasonable enough. In reality, I now know that I can personally lose weight on those numbers when I am 30lbs lighter. In return, I got low days at 50f 175c 240p, and two days a week with an extra 100 grams of carbs. These calculations were totally reasonable based on what Layne was told. Given that it was my first flexible dieting system, initially, I didn’t feel the least bit deprived. I never needed a single adjustment during the whole prep. Surely there were some legs of the prep where I was losing weight too quickly, but I either didn’t care, or I didn’t realize it was happening. I was on a mission to get shredded, end of story! At my core, I am a highly competitive dude. I wasn’t there to talk about how uncomfortable the process was, I was there to do the work.

On a side note, it kills me when people talk about “poverty macros” and look at me like I don’t know a thing about that. Trust me, I do. I was on them when I didn’t even require them, yet I was too busy working to wallow in self-pity. It might have sucked badly, but I didn’t know any better. If something is working, I will just keep working. On top of that, I was horrible at relaying information to Layne and would only weigh-in once a week every Tuesday before my 7pm session at the gym. I was a wild one, to say the least: untamed and with little concern about anything besides getting the work done. Let it be known that Layne was a great coach to me. He would go out of his way to call my family members in order to get ahold of me at times. He got me shredded and did his best as a coach. I parted ways with Layne right after my season ended and never sent him another question again once our contract had expired. I was not going to dare ask the man for a free offseason one-liner, regardless of how much we both benefited from my monster season.

So, besides the poverty macros part, the story seems to be all rainbows and ponies. This next leg, however, is where it gets pretty ugly. Like I said at the start, we got the work done. Now the season was over and even this thick skinned (figuratively at this point) young man had been pushed to his limits. I was burned out and never wanted to endure a pounding like that again. For starters, not seeing a day over 275 grams of carbs (my refeeds) for 9 months had me wondering if it was always going to be this way. My super peeled friend Ben Goins ran into his show on 300 grams of carbs on his low days and 400 on his high days. Many on the message board forums (we then populated) had attributed this to his reverse dieting the season before. Many believed, that by reverse dieting, he had rewired and “charged up” his metabolic rate. This was all I needed to hear and I took it upon myself to slowly increase my calories the weeks after my prep. I was hungry and low on willpower, but I believed I needed to get this done in order to be able to do this sport over the long term. Following up my season with a good reverse diet would make it so I could “diet on more calories” and increase my quality of life the next time I decided to prep. This approach also fit well with another little thing I was dealing with at the time. Something that, outside of a recent podcast, I never really talked about before.

Despite being eight years deep into this whole bodybuilding thing, I was fortunate enough to never have dealt with any sort of body dysmorphia…until after this particular prep. Man, was I struggling with this. The leanness was something I grew incredibly fond of and I was having a hard time letting go of it. During my prep, I was so hardwired to make the scale go down every week, that taking a step in the other direction felt wrong. I was also just attached to the look, plain and simple. All of the positive reinforcement I received from my peers created pressure for me to stay that lean. When you have about 6lbs of fat on your body, adding 3lbs of fat is very noticeable (to you) because you are increasing your body fat by 50%. So, the concept of a reverse was a dream to me because I would get to slowly increase my food while minimizing the amount of fat I had to put on. Fast forward to 11 weeks post show, my intake went from 50f 175c 240p to 65f 450c 200p while only being up a total of 3-4lbs (I remember the reading being 159.4lbs). It was the most disordered, confusing, and least fun leg of my bodybuilding career. I felt trapped by a sport that had previously made me feel free.  I see this picture below and it saddens me to think what this young man was struggling with. 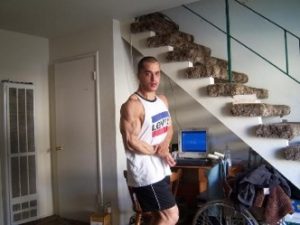 On the surface, it might have seemed like I was in control. Unfortunately, it might have been the most out of control I have ever been during my bodybuilding adventures. In the next installment of this series, I will go over what it was like, behind the scenes, during the first 12 weeks of my reverse diet.

Life is filled with triumphs and failures. We are not defined by these events, but rather the choices we make when faced with them. Natural bodybuilding is about choice. It is not our place to judge … END_OF_DOCUMENT_TOKEN_TO_BE_REPLACED