You are here: Home / Coaching Philosophy / Transparency in Bodybuilding

I just finished a Skype posing session with one of my athletes, who is deep into his contest prep and is finding it tough not to compare himself to others on the IG (Instagram). This is important, especially when many of the people he follows have a feed that looks like an ESPN highlight reel of their life, and everything appears to be super spectacular. Progress for my athlete at times has been quite challenging and in comparing himself to those who appear to make it look easy, he is left questioning his own abilities. My biggest concern as his coach is how to help him deal with the insecurity, because it can truly manifest as a thief of enjoyment. Contest prep is hard enough with the caloric deficit, training, cardio, and posing practice. So, you can imagine how throwing in additional self-imposed emotional stress adds kindling to the fire and can get the best of you. If you’re reading this as a competitive bodybuilder, or someone whose goal is to build your physique, then I’m confident you’ve experienced similar stress at one time or another.

When you compare yourself to someone else (especially when they appear to be “above” you), it is easy to forget that there’s plenty of context to take into consideration. However, that context is often not made available, and therefore you need to really be aware of the limits of your own perception. It’s so easy to get caught up in someone’s awesome shredded photos, their personal best lifts and the uplifting words they preach as if the sun is always shining and there is never a dark cloud in their sky. It’s hard not to compare yourself to that when it contrasts your own experience. I get it, comparison is inevitable as we happen to be involved in a sport where the goal is to look better than the guy or gal standing next to you on stage. I’ve seen so many bodybuilders become negatively influenced by other’s highlight reels because they fail to recognize that there are also many unaired outtake reels that preceded it. In my experience, it’s uncommon that people are willing to share their outtakes, and while I can’t say I know the reason in each case, my assumption is that in many cases these individuals may be trying to protect their egos. Personally speaking, as one who has been in this sport for over three decades, and hell for that matter, someone who has been on planet earth for 47 years, I’ve realized that no matter how jacked, shredded, successful, experienced, educated, well liked (or well followed), someone is, no one is exempt from insecurity and character flaws.

I have a humble following on Instagram and I know there are plenty of eyes on me. Every single piece of content I put out into the world is being absorbed and it can either have a positive or negative impact on those who view it. I do my best to be transparent and show that I’m human. The last thing I want is to portray myself as superior by only showcasing my highlight reel.  It makes me feel only half honest to do so, and for me personally, I struggle with that. Even with all the experience I have accrued over the years, I still have my fair share of insecurities. But, what I’m extremely confident about, is understanding that I’m a far better teacher when I’m standing on a platform of humility rather than narcissism. 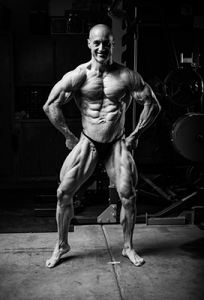 The photo above does represent success and it can generate quite a few likes on the IG. But trust me, there were plenty of outtakes over the years it took to create that physique. I’ll share a quick story with you from my ’14 contest prep, where after a stressful appointment with my tax advisor I went off the deep end and binged. I was so stressed about owing Uncle Sam a good chunk of change that I got in my car, drove from the tax advisor’s office to a Walgreen’s across the street, purchased four candy bars and proceeded to eat all of them on the forty five minute drive home. Let me tell you, it didn’t stop there either. Oh no, I continued to eat until I could no longer physically get more food in me. The guilt from that binge kept me off the scale for a few days, and I knew I couldn’t handle the reality of the damage represented by a number on the scale. The next morning was painful enough just seeing the bloat in the mirror, but with that said, I didn’t throw myself a pity party. I knew self-pity wouldn’t lead to progress, so I simply forgave myself and carried on the next day, as that’s all I could do at that point. Bingeing 6 weeks out from the WNBF Worlds is surely an embarrassing moment, but long story short, it all worked out in the end. Despite what was a negative experience at the time, I don’t regret it, as it’s one of the many humbling experiences that has helped me transcend into a better coach.

In closing, I know social media is a great way to learn and it can also be a great place for inspiration, so my intention is not to discourage you from it. Rather, my intention is to remind you about the limits of your perception on social media, because there is often hidden context, and no matter how it appears, never forget we are all human. No one is perfect. If someone you are following appears to be “above” you, I would challenge you to change your perspective, and simply grant that at most, they may just be further down the road.

Life is filled with triumphs and failures. We are not defined by these events, but rather the choices we make when faced with them. Natural bodybuilding is about choice. It is not our place to judge … END_OF_DOCUMENT_TOKEN_TO_BE_REPLACED