If you’re a bodybuilder who is fast approaching peak week (the week leading to a show) or is getting ready to compete in the near future, this blog might intrigue you. I wanted to share with you, as a coach, how I approach peak week and I want to feature one of my athletes who is having a tremendous 2018 contest season. Thomas Davies, who is coming off a novice class win at the BNBF Midlands on August 11, 2018 nailed his peak and his best physique to date. 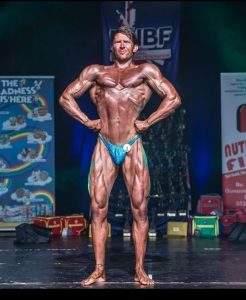 Before I get into the blue print of Thomas’ peak week, I feel it’s important to first recognize that his peak week wasn’t anything magical and we certainly didn’t rely on any voodoo tactics. Maybe you know what I mean by magic or voodoo tactics, especially if you’ve been around the block a few times like I have, but if not, then I’ll fill you in as to what I’m referring to. Quite often when you hear the term “Peak Week”, it’s thought of or assumed by many that by using extreme tactics such as restricting water intake, cutting sodium, performing depletion workouts, etc., you can dramatically enhance your physique appearance the week leading into a show. Speaking from personal experience competing in over 30 shows, those tactics can have quite the opposite effect and actually diminish the appearance of your physique. I could tell firsthand a few horror stories, but to keep this blog from getting too long I’ll leave those for a possible future book.  For now, I’ll briefly touch on a few of the more common misguided tactics that misinformed physique athletes tend to try during peak week.

In an attempt to attain a tighter look, many physique athletes restrict their water intake or cut it out altogether. Cutting water can actually have the opposite effect, as it leaves your muscles looking flat which leads to a softer look. Also, not to mention you end up in a dehydrated state where you’re prone to fatigue, muscle cramping and even death in extreme cases. Keep in mind muscle contains around 75% water , so if you’re restricting your water intake (especially restricting it altogether) your muscles are likely going to resemble a sad piece of jerky as opposed to a well hydrated piece of beef [1].

Of course you don’t want to look like that sad piece of jerky, so water intake during peak week for my athletes tends to hover at their normal levels or even a touch higher.

Another misguided peak week tactic is cutting sodium in order to prevent water retention, again in an attempt to ensure a tighter look. While it’s true you can certainly hold more water if your sodium intake drastically increases from your average intake, you can also cause problems if your sodium intake drastically goes down. Sodium helps the body keep fluids in a normal balance, has a key role in normal nerve and muscle function, and also has an acute impact on blood pressure. An acute increase in pressure can help you get a pump [2], which was probably for most of prep, so if anything, you might want sodium to increase. With that said, this often occurs simply by increasing total food as a part of carb loading (which I’ll cover more of in part two). But overall, it makes sense to not doing anything too crazy with sodium to avoid disrupting your normal equilibrium. When programming my peak weeks, I like to keep sodium levels pretty consistent with my athlete’s normal intake.

Often you see many physique athletes refer to depletion workouts (higher volumes, higher rep ranges) during peak week as a way to deplete glycogen stores and potentially tap into more fat loss. The issue here is the training stress can be very different than their usual training, so the risk of muscle soreness is high due to that change in stress. Muscle soreness is definitely not welcomed during peak week as potential swelling from the soreness can lead to water retention and obscure muscle definition. So even if you were able to tap into some fat loss by incorporating depletion workouts, it might be a wash in the end due to water retention. Water retention is not welcomed on stage due to obscuring your definition, but also trying to pose optimally (tensing down hard and holding the poses) is quite the challenge when you’re experiencing muscle soreness. Just like water and sodium intake, when it comes to my athletes’ training during peak week, I like to roll with a consistent approach with some minor revisions that I’ll touch on later in this blog.

You may have heard tilapia thins the skin or eating shredded wheat actually makes you look drier? I’m sure there are quite a few more foods out there that supposedly when eaten during peak week, will bring you that magical unicorn effect. Not to say they are bad food sources, but if you’re not used to ingesting certain foods, you run the risk of causing digestive issues and or bloating during peak week. Being bloated on stage or having digestive issues prior to stage is not a look or feel you want to experience. Just like the prior tactics mentioned, it’s a safe bet to go with what your body has been accustomed to in the weeks leading into peak week.

Now that you’re aware of some of the “what not to do’s”, I’ll fill you in as to what Thomas and I actually did do in attaining his best ever physique in Part two. Stay tuned!

Life is filled with triumphs and failures. We are not defined by these events, but rather the choices we make when faced with them. Natural bodybuilding is about choice. It is not our place to judge … END_OF_DOCUMENT_TOKEN_TO_BE_REPLACED