Welcome to our “Good Question!” series, where we answer the best questions from the 3DMJ community in blog format. Today, I’ll be answering the question, “I went to a lecture on metabolism and food tracking, and learned everything is variable and full of errors. How it is even possible to get results in the context of bodybuilding?  As I understand it, by eating similar foods you won’t be especially accurate, but you will be consistently inaccurate.  So my question is, how does flexible dieting fit into this? If I am eating a lot of different foods each week, and my digestion presumably varies for all these different foods combined with inaccurate food labelling, am I just introducing greater amounts of error into an already precarious calorie balance equation?”

First, good on you for attending continuing education seminars and asking questions related to the fundamentals of both the theory, and practice of the energy balance equation.

Now, let me state up front a few things.

If you consider these factors, it’s no wonder some people cast shade on the energy balance equation. But the issue isn’t the equation, it’s the ability to track all the variables. As a parallel, the equations that allowed us to put an astronaut on the moon could only be solved by the best team of mathematicians in the US with the aid of the first supercomputers. Meaning, 99.9% of the people on the planet couldn’t solve the equation, but that doesn’t mean the equation itself was precarious.

First, I need to introduce you to a concept you actually alluded to in your question: the difference between validity and reliability. 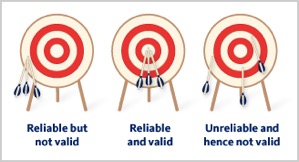 Validity is whether or not a variable we track represents what is actually happening in truth. Reliability is about consistency; whether or not the same practice (or test) will produce the same outcome when the same conditions are tested. In the context of nutrition tracking, there is a solid body of evidence showing that the average person can’t provide a valid estimate of how many calories they’ve consumed. A study was even conducted on dieticians, and found that while they were substantially better than the average Joe or Jane, they still were off by ~200kcals on average [1].

However, if you look at the picture above, you might realize in the context of making progress in fat loss, validity actually isn’t that important. Reliability on the other hand, is. When a plateau is reached in fat loss, many times the appropriate response (but not always) is to make a reduction in calories or to increase cardio, in order to break the plateau. So long as you can reliably track these variables, the relative change will be the same, even if the representation isn’t valid. For example, let’s say you think you are eating 2500kcals and you are burning 1000kcals from cardio each week. If we decide to reduce calories to 2200 and increase cardio to 1200kcals, it doesn’t matter if you were actually eating 2700kcals and burning 800kcals so long as you actually made a 300kcal food intake reduction and a 200kcal expenditure increase to break the plateau.

However, this also assumes your bodyweight accurately represents changes in fat mass. Many times, it doesn’t! Surely we’ve all seen the scale drop 1-2lbs or increase 1-2lbs overnight, without a substantial shift in activity or eating. Unless you were sleep walking and consumed 3500-7000 kcals, you can be sure it’s not fat tissue. So, it must be water. Our bodies are more than 2/3rds water and a ton of variables can impact water balance, and subsequently scale weight. So, just like food tracking, body weight tracking must be reliable.

So how do you make sure your tracking is reliable? For bodyweight, it’s rather straightforward. You should use averages collected under the same conditions. For men, you can compare weekly averages (7 weigh-ins for the week divided by 7) taken under the same conditions: nude, upon rising in the morning (a consistent wake-up time is best), after using the bathroom, before you eat or drink anything. The same process applies to women, however, the menstrual cycle can add more variability to the data, so you need more of it to increase the signal to noise ratio. I like 2-3 week averages in women, and if there are especially large fluctuations in weight due to menses-related water retention, comparing the same week of the cycle in the subsequent month is a better option; i.e. first week of your cycle in month 1 to the first week of your cycle in month 2 (assuming menstrual cycle regularity).

For food intake, in the context of a contest preparation bodybuilder, there does need to be some restriction to how flexible you can be. Not necessarily in food choice (outside of what you can “fit” into your macro targets while still feeling satiated and paying respect to fiber and micronutrient content), but rather, in food preparation. Meaning, that food must be weighed, in its raw state before cooking modifies its water content (and thus weight, and yes this is what the nutrition label represents), anything calorie-containing must be tracked (items in food prep, milk in coffee, fruits, veggies, you name it), and eating out needs to be minimized (we typically advise a max of once per month). Believe it or not, your digestive tract is highly efficient, so having food variety won’t lead to added variability so long as it is tracked meticulously (and if anything it would result in additional, unexpected weight loss as you can’t digest something so well that it has more than 100% of the kcals it contains).

Doing all of the above will drastically reduce the variability and therefore drastically increase the reliability of your tracking. Subsequently, this method can be quite successful and predictable assuming adherence, and that the person doing the tracking is experienced and educated in the process (which is not always the case and takes time).

Now is this a flexible diet? Well….compared to what? Compared to the typical approach bodybuilders take where they shun all forms of human contact outside of the gym, eat a list of foods that consists of 8 items and systematically remove major food groups over time while crash dieting? Hell yes it is flexible! But is it flexible compared to what I would recommend to an average person looking to change their lifestyle and lose weight over time? Oh God no! The average person does not need nearly this level of precision to make progress, as they don’t need to achieve essential levels of body fat (nor would they benefit from it) over a time restricted period. Adherence and sustainability is everything when making a lifestyle change. For a bodybuilder, it only needs to be sustainable for as long as the contest prep diet lasts.

Make no mistake, bodybuilding is an extreme sport. Even if you do it drug free, with patience, with a holistic attitude towards physical and mental health, and with a science-based approach under the mentorship of a good coach, it will take a toll. It is unavoidable and it will disrupt your life to some degree. For that reason, many competitors struggle with food and body image relationships. But, given the constraints of the sport, it certainly can be sustainable and it gets better with practice if you make it as flexible and inclusive as possible, while still maintaining the necessary accuracy.

Life is filled with triumphs and failures. We are not defined by these events, but rather the choices we make when faced with them. Natural bodybuilding is about choice. It is not our place to judge … END_OF_DOCUMENT_TOKEN_TO_BE_REPLACED