To kick-off Team 3D Muscle Journey’s first ever podcast, coaches Andrea Valdez and Eric Helms discuss Eric’s background and how he got to where he is today. The two start their discussion covering Eric’s childhood, what sports he was involved in, and how a childhood dream of working for the FBI lead him to join the Air Force at the age of 18.

While in the Air Force, Eric realized this wasn’t the career for him and began to dabble in different avenues, including the hip-hop scene as an MC. Shortly after this, Eric met his wife Barbra, and in the year 2004 began his weightlifting journey.

After the Air Force, Eric’s passion for science and the practical application of exercise and nutrition really began to take hold. He started his journey in the fitness industry as a personal trainer at the local YMCA.

From here, the discussion goes on to describe how the meeting of a former Mr. Alaska encouraged Eric to continue his journey as a drug-free athlete. In 2007, Eric stepped on the bodybuilding stage for the first time. While at this same show, Eric met his future colleague and life-long friend Alberto Nunez. It was also during this same competitive season that Eric set the goal for his life’s work, which was to provide an evidenced-based approach, and to bring together the natural bodybuilding and power-lifting community.

Eric and Andrea go on to discuss how the forming of 3DMJ came about, Eric’s route and approach to his formal education, and why he choose to relocate to New Zealand for his PhD.

To finish off this week’s episode is a discussion on how the creation of the Muscle and Strength Training books came about, what Eric’s future goals are for both his career and as an athlete, and why Eric chooses to avoid the public lifestyle that is so commonly seen in the fitness community. 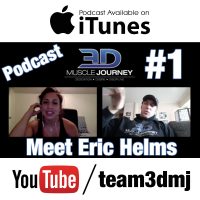 Selected Links from this Episode:

To be notified of future episodes, please feel free to sign up to our email list newsletter here – https://3dmusclejourney.com/newsletter/

Life is filled with triumphs and failures. We are not defined by these events, but rather the choices we make when faced with them. Natural bodybuilding is about choice. It is not our place to judge … END_OF_DOCUMENT_TOKEN_TO_BE_REPLACED