In my last blog, I covered the “whys” of deloading. I hope I made it as easy as pie to understand in layman terms. Performing and being able to train at your absolute potential is the goal. However, that only happens a handful of times a year for most advanced athletes; thus, deloads become a must for all of us eventually.

Reducing volume while more or less maintaining intensity are the basic tenets of tapering for maximal strength [1]. That’s all that really matters, and as you can imagine, there are probably dozens of ways to accomplish that. Therefore, in this, blog (the first of two) I want to outline a collection of “plug-and-play” deloads that fit almost any training context athlete level. Also, variety helps to make deloads more “fun” and less of a dreadful, yet necessary evil. Ready? Here goes.

This one is the most obvious. This deload is for those who are doing what seems like endless sets and reps in the 12 to 20 range, continuously chasing “the pump”, without any set progression. Many times, lifters who fall into this category will actually regress over time and not even know it. In these programs, it takes a good chunk of time to build appreciable amounts of fatigue as long as training to failure is not part of the program. It’s also usually pretty easy to drop volume when training in the 12 – 20 rep range regardless of loads. So, with this particular individual, simply capping sets at either 1 or 2 does the job. Easy enough to do physically; however, sometimes this is hard to do mentally. You simply can’t allow yourself to not work hard right? However, there is an easy fix for this. If only 1 set is going to be done, take the loads’ up! You really can’t take the loads high enough when only doing one set to exceed or even meet the volume done in previous weeks. Here’s what it looks like.

In essence you are letting your “volume junkie” know what it feels like to test strength and since it’s one set, they will probably darn near empty that tank and still feel like they “went hard.”

Here is where I end up most of the time. I’m the person that has a hard time allowing themselves to train with anything less than a 6 or 8RM and does 5 sets of 5 on just about everything. With this athlete, not only is capping sets recommended, it’s almost required. Also, depending on the lifter’s level, loads may need to be dropped slightly. However, as long as sets are capped, loads do not need to be dropped much, or perhaps even at all. Likewise, maybe adding a rep or 2 per set might make it easier mentally for our strength junkie to actually cap his volume. This is what it might look like.

In addition to deloads, it’s also important to consider the deload’s close cousin, the intro week…which functions like a deload, but has a preparatory vs recuperative purpose. This comes from the recent edition of the “Muscle and Strength Training Pyramids” but our very own Eric Helms, Andrea Valdez and Andy Morgan (check the books out here if you’d like to get the full texts).

“An intro week can be useful when finishing up an intensity block (high load/low volume) and moving into a volume block, so you can acclimate to the higher volumes that you are no longer accustomed to. So while they are largely the same concept, they differ in purpose and are structured based on what’s coming vs. what you already did.

Also in the spirit of an “Intro week” as outlined above, this approach to an intro works VERY well and helps those build strength who are afraid to lift heavy. The rep chaser is very cognizant of reps each and every week and always tries to improve. This deload will look very similar to our “volume junkie’s” and will introduce them to some heavy lifting in a safe and controlled manner. As we saw with our volume junkie, you almost can’t make the loads heavy enough to surpass previous weeks’ volume when keeping it to just 1 set. A single AMRAP (as many reps as possible) is a quick and easy way to deload, dabble with heavier than normal loads, and give a strength test as an introduction to a heavier block of training.

I Don’t Need Full Range of Motion! – In your efforts to increase loads, your reps are half of what they were.

Again, guilty as charged. In my past, I chased heavier and heavier loads in an effort to get as strong as you know what. However, what I failed to understand was that my progression was much too fast. As I seasoned lifter I attempted to go up in load every week in most cases and thus, my squats started getting shallower and shallower. My overhead presses went from greater than 90 degrees elbow flexion, to not even hitting 90 degrees, etc., etc. So, my efforts to increase load and volume were actually negated by each rep getting shallower and shallower, taking less and less time to complete, and therefore less and less muscle essentially being used. Finally, I put my foot down, realized how ridiculous my reps were getting, and for lack of a better term, “deloaded” by lightening the loads and using a fuller range of motion. My joints thanked me!

It is well established that training with full range of motion is better for hypertrophy [2, 3] and for powerlifters, if you don’t hit depth you aren’t getting on the board! So, in this case, the deload would be a “reset” of your training that will stimulate muscle growth if the new habits are adhered to long term within the context of a progressive program. So, have the peace of mind and know that just because the load is decreasing, volume is not. Because if you consider that each rep lasts longer, and the weight is moving a greater distance, you’re actually doing more total work and in each rep your muscles are exposed to a greater tension stimulus.

What Are Accessories and Secondary Work?

For those of us (not guilty in this case) who only do a handful of compound lifts, eventually even a program progressing in volume in those limited movements can generate a great amount of fatigue that will stop progression in its tracks. This is useful for people who are extreme minimalists and build volume up quite high in the main lifts, which are quite stressful to the body compared to other movements. 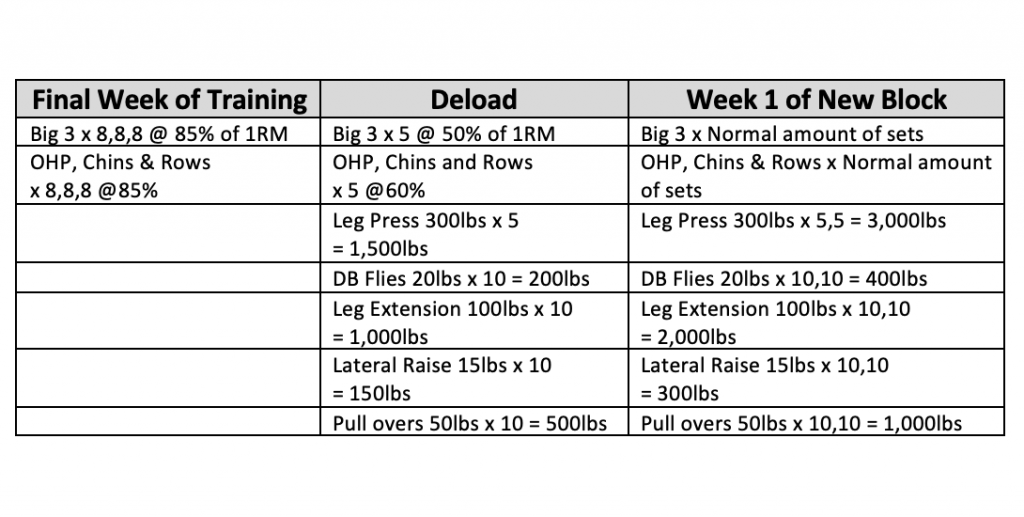 In this instance, the deload could serve double duty as both a week of respite that dissipates fatigue on the main lifts, and as an introduction to a phase of training which incorporates secondary work into your program (or beyond a phase, indefinitely). If your previous block was fairly short in duration, you could probably get away with just one week of deloading / intro’ing. However, if your previous block was quite long and the fatigue was noticeable in both your training and in life, then it might be worthwhile to run a 1 week deload and then a 1 week introductory cycle. Thus, you can slowly increase from 1 set during a deload, to 2 during the intro and then to 3 sets of secondary work in the new block (likely while also bringing main lift volume down to something less stressful on your body).

The above set up for “what are accessories” would work for this individual as well, with one simple adjustment. Simply get rid of the exercise(s) that is/are aggravating the injury or the exercise(s) that can’t be done. Then, once the exercise that is in question can be done again, it’s best to start with laughably light loads to reacclimate. Sometimes an injury allows the use of the exercise that previously caused injury, but only if it is performed very lightly, or perhaps if it is done alongside blood flow restriction (BFR; wrapping a knee wrap at the hip or shoulder at a 7/10 tightness and training with 20-40% 1RM [4]) to allow adequate muscular stimulus despite low load training.

As an aside check out our articles on BFR: here, here, and here if you aren’t familiar.

Let’s examine this visually for a person who may have injured their back and can’t Squat or Deadlift. 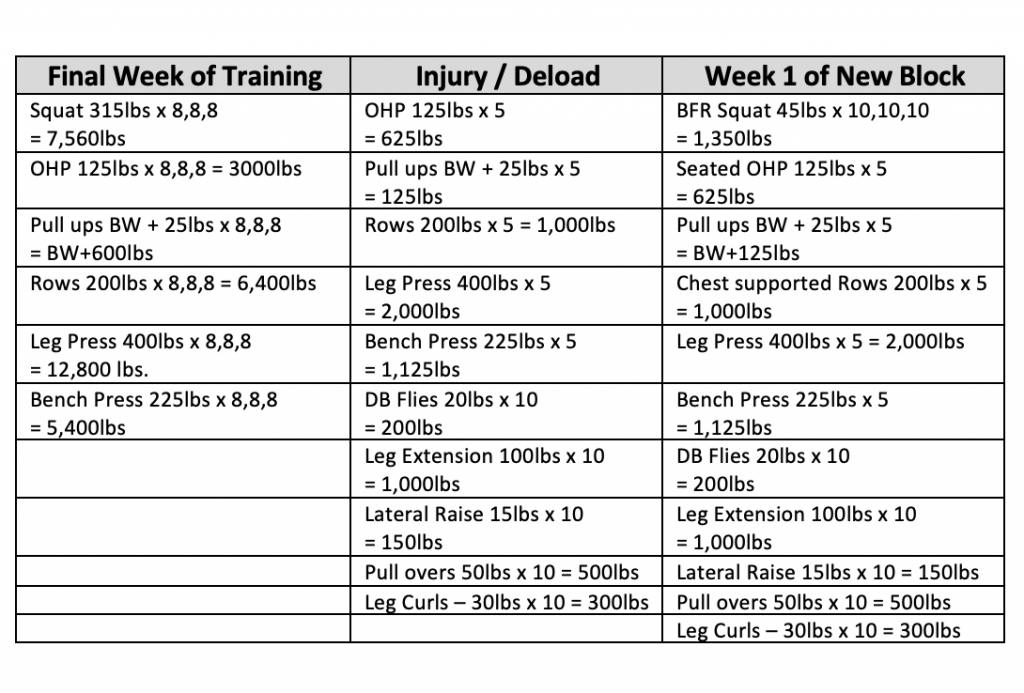 Then, with each successive microcycle, a slight progression of adding load to the bar on the BFR Squat as tolerable can occur. Also, the rest of the work would of course progress as per your usual fashion.

There, you have 7 deloads that fit into many different contexts of training. However, there are just as many programs as there are ways to deload. Stay tuned for part 2 of this blog where I will outline 7 more scenarios and 7 more deloads to go along with them!

Life is filled with triumphs and failures. We are not defined by these events, but rather the choices we make when faced with them. Natural bodybuilding is about choice. It is not our place to judge … END_OF_DOCUMENT_TOKEN_TO_BE_REPLACED