We all have those genetically weak body part body parts that leave us stumped and frustrated. In my case, it was my high calf insertions. Now before I go on, this isn’t going to be another tutorial on how you should be pausing at the bottom of your calf raises. I have exhausted this topic countless times on YouTube, Instagram, and many other platforms. I will not go there again…but if you are late to the party:

Maybe I am bit overzealous with this approach, but I feel it should part of your collection of bodybuilding fundamentals at this point. Anyway, moving on…

Let me say that my calves are easily my most developed body part relative to were they started. Despite all the effort and careful plotting that I put into my calf training, this still comes as a shock to me. In the picture below, I was about 4 years into training, and a bit over 200lbs. 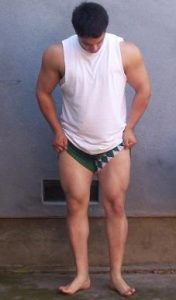 Even the season I “broke into the scene”, earning my pro status, my calves were below average at best. 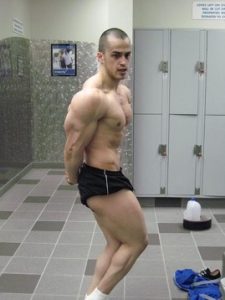 It wasn’t until my pro debut that I got to meet up with a long-time internet friend, and fellow pro bodybuilder, Ben Goins. Seeing his calves in person actually motivated me to earn myself a pair. 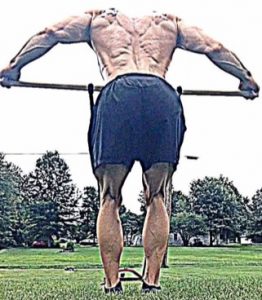 Looking at Ben, it’s easy to see why such a forgotten muscle group could be so inspiring.

As soon as I got home, I did my research, and I began to do my calf raises with same techniques I use today. Still, I will be the first to admit that when I was training my calves, it didn’t give me the same feeling I get when I train my quads, or my back. It was a whole lot less emotional, and strictly business. I committed to the amount of work I designated to my calves, never more, and never less. And, I did a few other things that were unusually different compared to how I approached the rest of my muscle groups.

Since a calf PR is not exactly the most exciting of gym moments, I never forced milestone loads. I simply used the loads that were appropriate and kept me true to my technique. If I was ever in a panic because of the lack of progress, I wasn’t quick to throw in some improvised work mid training session. I simply waited for the drought to pass, and because I wasn’t emotionally attached to my calves, being patient wasn’t particularly difficult. I was a robot when it came to these baby cows, unlike the way I was with other muscle groups, or even other facets of bodybuilding. While my calves were growing because I was patient and stuck to the script, behavior in other areas was much less rational.

I would adopt new and sexy training approaches in an effort to crack the code for other body parts. I would even end gaining phases prematurely because I started to feel less like a bodybuilder when my bodyweight got past a certain point. I will even say that in 2014, I prepped when perhaps it would have been better to wait an extra year. While I do feel that my decision making is a bit more rational than your average bodybuilder today, I still make decisions based on my emotions more frequently than I care to admit.

However, while all that panicking, emotional thinking and getting in my own way was going on, there was a version of myself quietly plopped on a calf machine. This part of me consistently trained calves, patiently counting three seconds at the bottom before I started the concentric, pausing at the top and repeating for every prescribed rep. This part of me never added load that exceeded my capacity just because my bros at the gym were present and repeated this machine-like dedication for years.

Today, I look at my calves and think to myself how much better of a bodybuilder I could be if I only played by the same rules with the rest of my training. 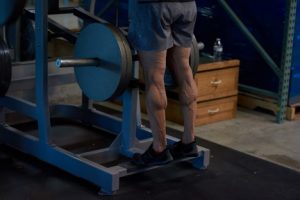 Looking at them, you might argue they are still not a great body part, but relative to where they started, they’ve made the most progress out of all of my muscle groups. Part of the problem is that I love bodybuilding, but to be honest, I have never really loved my calves, and ironically, this is in part why they have done so well over the last decade. It’s been strictly business training them, and it reflects when I scale it to the progress I have made with the rest of my physique.

My bodybuilding journey is most effective when I am rationale, less driven by emotion, and it shows. These days whenever I catch myself having an emotionally driven moment in regards to bodybuilding, I simply ask myself: “What would my calves do?”

Life is filled with triumphs and failures. We are not defined by these events, but rather the choices we make when faced with them. Natural bodybuilding is about choice. It is not our place to judge … END_OF_DOCUMENT_TOKEN_TO_BE_REPLACED